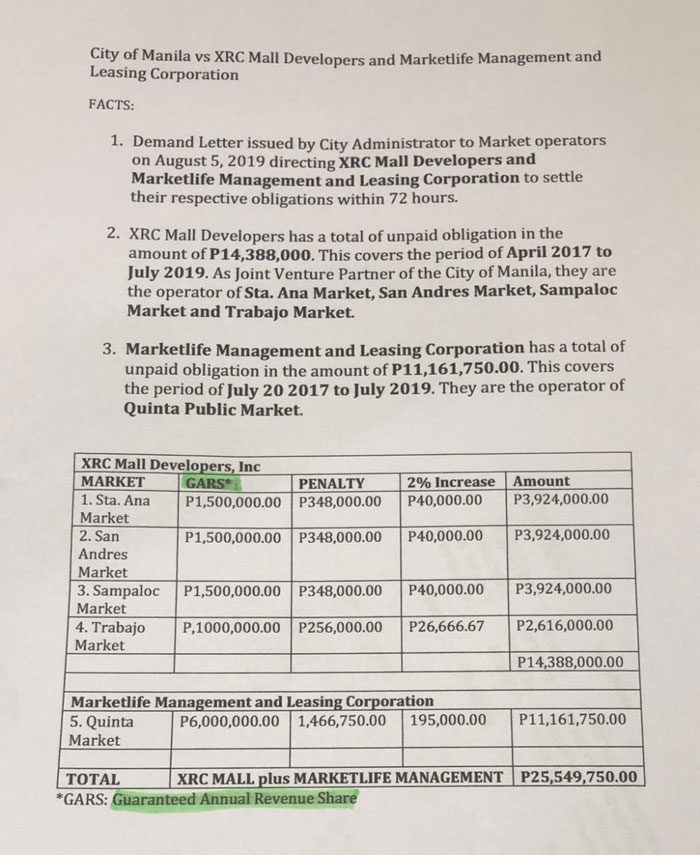 Moreno gave the two companies 72 hours to pay their debts. And if they fail to do so, the city government will take over the five privatized public markets, he added.

“Binibigyan ko po kayo ng 72 hours to pay your obligation to the people of Manila and the city government,” Moreno said.

“In the absence of payment, we will be forced to implement the provision of the contract to invalidate or at least strike down your contract,” he added.

In his live video, the Mayor enumerated the unpaid financial liabilities of XRC Mall Developers Inc. and Marketlife Management and Leasing Corporation, which are operating five of the city’s public markets.

The total unpaid obligations are the sum of the unremitted guaranteed annual revenue share (GARS), penalty fees, and surcharges that should be remitted to the local government.

XRC Mall Developers Inc and Marketlife Management and Leasing Corporation entered into a joint venture agreement with the previous administration.

However, they never remitted the city’s guaranteed annual revenue share since 2017, Moreno said.

The deal obligates them to remit a percentage of revenue share to the city every year, he added.

The Manila Bulletin is still trying to reach the two wet market operators for their comments.

Manila Mayor Isko Moreno said the city will deploy facial features recognition technology to help find fugitives and suspects in criminal activities. Moreno also called on victims to help the city by pushing through complaints filed so that sus...

Manila Mayor Isko Moreno vowed to change the old practice in the City Hall when it comes to hiring new employees. Speaking before employees of the Manila Health Department under Dr. Arnold ‘Poks’ Pangan, Moreno assured that he ...

For the second straight year, the Philippine Ports Authority (PPA) scored big in the annual port user’s satisfaction survey particularly on the aspect of integrity. The 2019 survey conducted by the Development Academy of the Philippines (...

A 43-year-old Chinese businessman was injured after an unidentified gunman onboard a motorcycle shot him in his car along along Padre Burgos Avenue in Ermita, Manila on Feb. 23. Police identified the victim as Wenyan Shao, 43, businessman, a re...

Engineering board topnotcher gets cash incentive from Muntinlupa

Festival Mall denies lockdown after the visit of sick patient