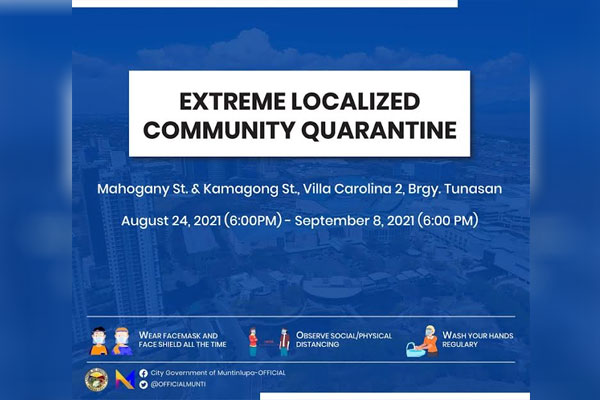 9th area in Muntinlupa under lockdown

The local government of Muntinlupa has declared a granular lockdown anew in a subdivision in Brgy. Tunasan, the ninth area to be placed under lockdown since August 10, in a bid prevent further transmission in the community.

Muntinlupa City Health Office recorded an alarming attack rate and doubling time for the two streets. In Kamagong St., the number of cases has increased from one individual last week to 13 cases for the current week as of August 23, while the.

The community has 56 declared households with 247 residents, reporting a clustering of cases, a narrow doubling time of 2 days, and a high attack rate of 526.31 per 10,000 population.

For Mahogany St., clustering of cases was also recorded with 11 active COVID-19 cases out of 295 residents. The community has a high attack rate of 372.88 per 10,000 population and a narrow doubling time of 6.0 days.

Further, the areas declared under lockdown have high priority groups including 99 senior citizens, 2 persons with disability and 23 children aged less than 5 years old.

Muntinlupa CHO is set to reinforce mass testing and contact tracing in the area while the PNP will enforce security measures. Meanwhile, the City Social Service Department and Barangay are set to provide food packs and other basic items for the affected residents during the effectivity of the ELCQ.

With the growing number of areas of concern under lockdown and alarming attack rate in the communities, Mayor Fresnedi urges city residents to get vaccinated and underscores the importance of vaccine as protection against COVID-19.

City residents are encouraged to register online through the city’s COVID-19 vaccination registration system via www.vaccine.muntinlupacity.gov.ph/muncovac.

Recently, the Muntinlupa City COVID-19 Vaccination Program (MunCoVac) advised residents who have registered online but haven’t received an advisory for their appointment may fill-out an online form https://forms.gle/fEAELhwxURe4aNZU8 to receive their schedule.

As of August 18, 422,430 vaccines have been administered in Muntinlupa. At least 275,046 individuals have received their first dose, of which 7,160 were inoculated in vaccination sites of Muntinlupa private companies, translating to 71.3% of the target population. While there are 151,743 fully vaccinated individuals, or those who received their required doses, translating to 39.3% of the target.

Caloocan has started providing “Fully Vaxxed” certifications to establishments in the city whose employees are 100 percent fully-vaccinated, according to a report by Daily Tribune. Mayor Oca Malapitan said the initiative will encourage b...

In a bid to prevent further COVID-19 transmission among the youth, the local government tightens its curfew operations and warns minors to observe curfew rules or face suspension in the local scholarship program. Under a local ordinance, curfew viol...

The Quezon City government is strictly monitoring all closed-setting facilities situated in the city after 22 more individuals tested positive for the coronavirus disease 2019 (Covid-19) in another religious convent, according to a report by Phi...

A third convent in Quezon City was hit by an outbreak of coronavirus disease (COViD-19) cases with 13 nuns reportedly being infected, according to a report by Manila Bulletin. The nuns are reportedly from the convent of Stella Maris in Cubao, Q... 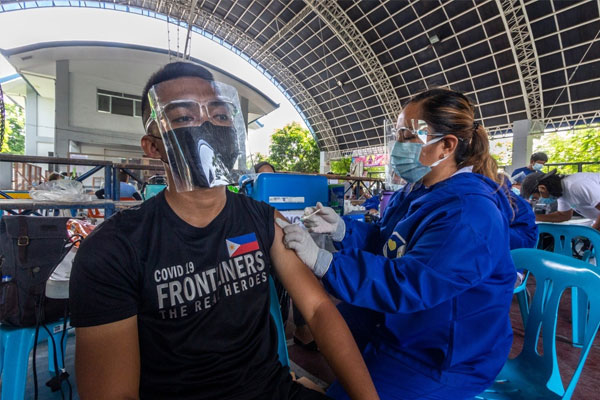 Muntinlupa to open registration of adolescents for Covid vaccination