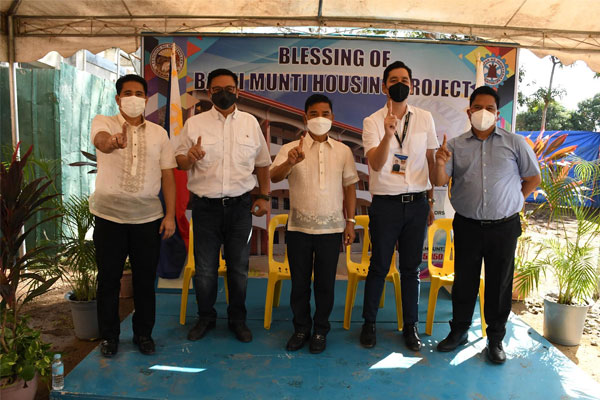 In celebration of Muntinlupa’s 104th founding anniversary, the local government leads a series of activities including the blessing of a housing project and recognition of the city’s COVID-19 response partners.

As a kick-off event, Mayor Jaime Fresnedi and other local officials grace the blessing ceremony of the first four buildings of BALAI Muntinlupa, a housing project for local government employees and officials, situated at Lakeview, Brgy. Putatan, Monday morning.

In the afternoon, a Thanksgiving Mass is set to be conducted at the Muntinlupa City Hall Quadrangle, to be followed by a short program.

Vice President Leni Robredo congratulates the city officials and the people of Muntinlupa during the founding anniversary via recorded message. VP Robredo also recognizes the city’s resilience all throughout the years and vowed to provide assistance to Muntinlupeños.

Mayor Fresnedi expresses his thanks to the Office of the Vice President and the city’s partners in the local COVID-19 response efforts and sustainability of programs despite the challenges of the pandemic.

The local exec attributes Muntinlupa’s development and the improvement of the local COVID-19 situation to the “whole-city” recovery approach.

Muntinlupa City’s active cases have dipped to a single digit since December 16. To date, there are only six active cases in the city with five barangays logging zero active cases. While as of December 16, at least 437,010 individuals were vaccinated in the city, translating to 114% of the target.

Muntinlupa gained its independent status as a municipality in 1917 through Executive Order 108 issued by Governor General Francis Burton Harrison. Today, it has transformed as a Highly Urbanized City with nine equally progressive barangays and a population of 543,445.